You can scan the tracking image with zapcode below to test it out. 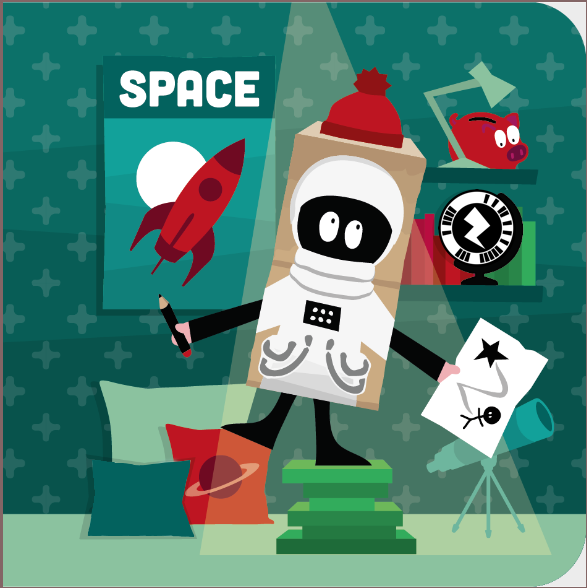 In this step-by-step tutorial, we will create an AR experience’s opening transition consisting of an experience’s target image breaking apart.

To show you how to add this opening transition to an existing project we’ve built it on top of the Augmented Portal step-by-step project available in the ZapWorks documentation.

To discover how to create this opening transition, take a look below.

Prefer to look at the final version? Download the completed project here!

We’ve decided to give users the illusion of 2 doors sliding away from each other, progressively revealing the inside of a room.

Using Photoshop we’ve horizontally split the target image into 2 images, a top and a bottom one. After importing these images into Studio, we’ve created a timeline to animate the opening transition and we’ve set it to play when the target image is detected, that’s it! Click here to download a zip file containing the images and the project’s zpp file. Once the file has been downloaded, unzip it.

Note: To add a group inside a node, right click on the node, select ‘New > Group’ and name the new group. 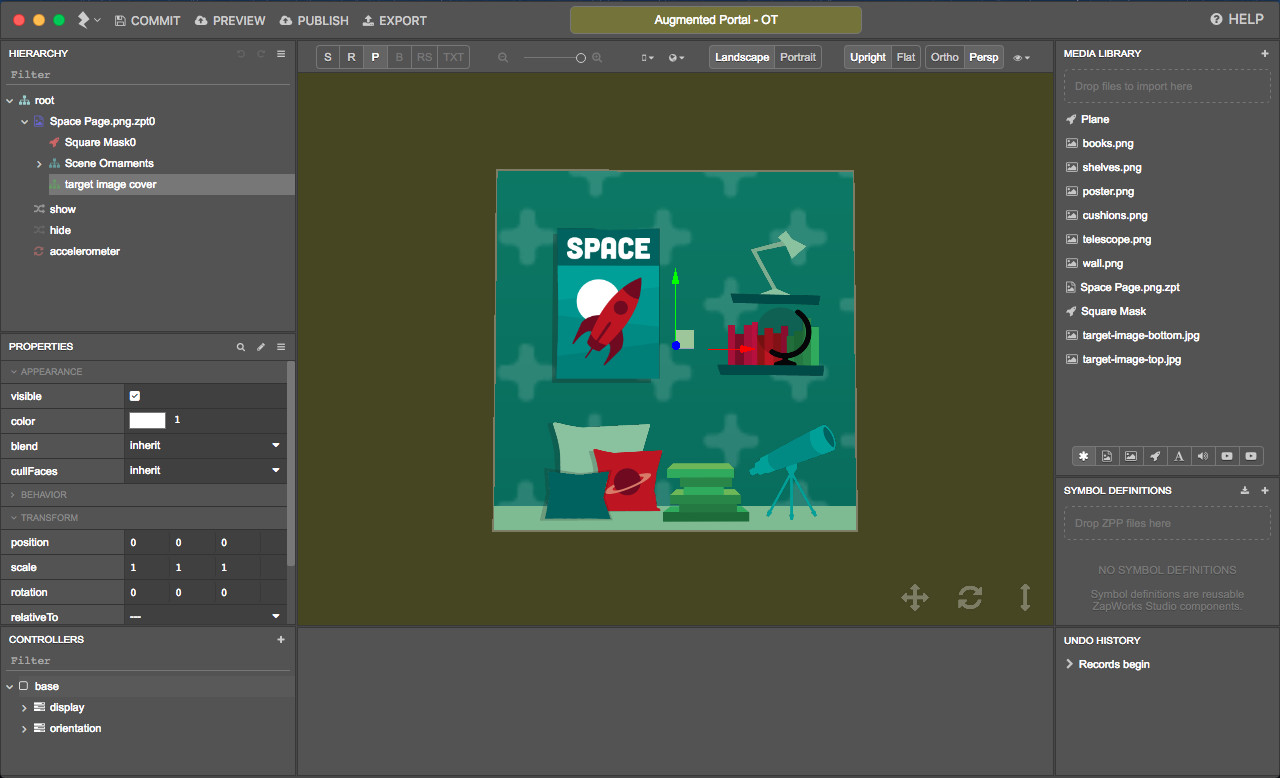 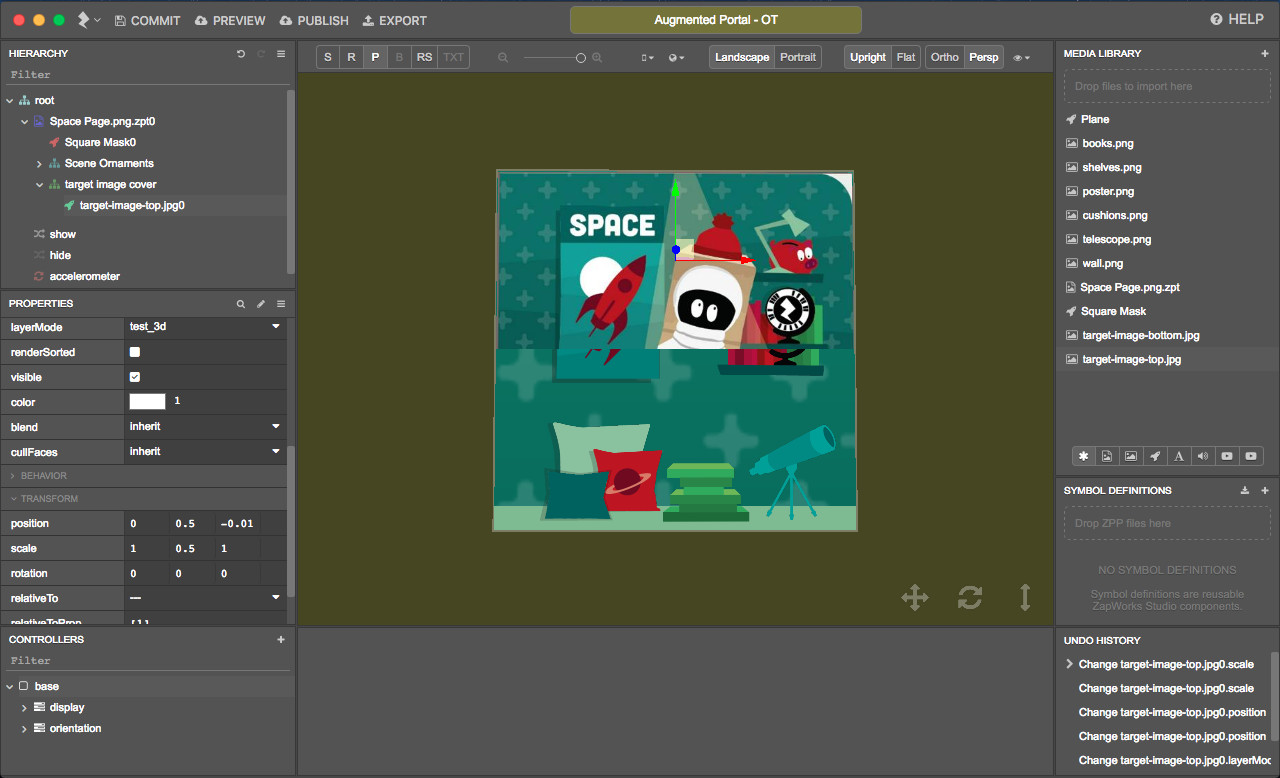 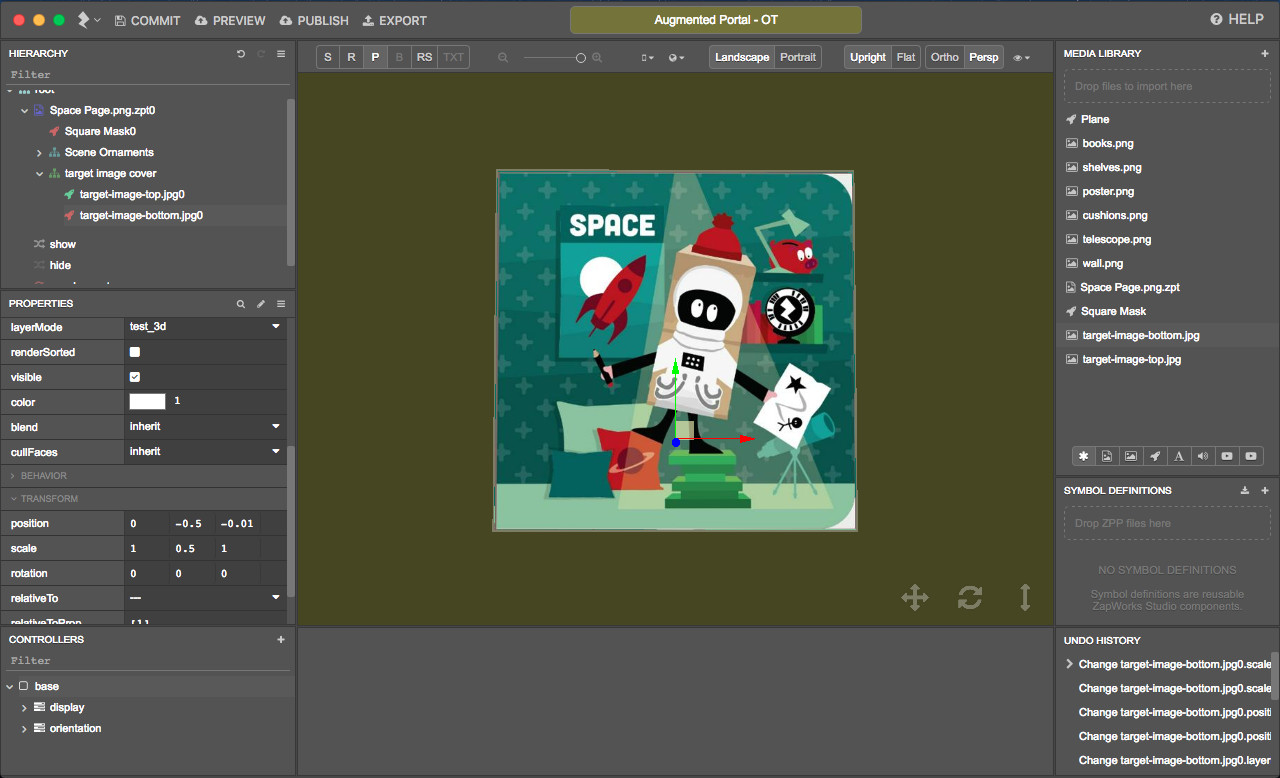 Note: To create a controller, in the Controllers panel, click on the ‘+’ icon next to ‘Controllers’, select ‘New Controller’ and name it.

Note: To add a standalone timeline to a controller, right click on the controller, select ‘New Timeline’ and name it. To change the length of the timeline, in the timeline panel, update the value next to ‘Length’. 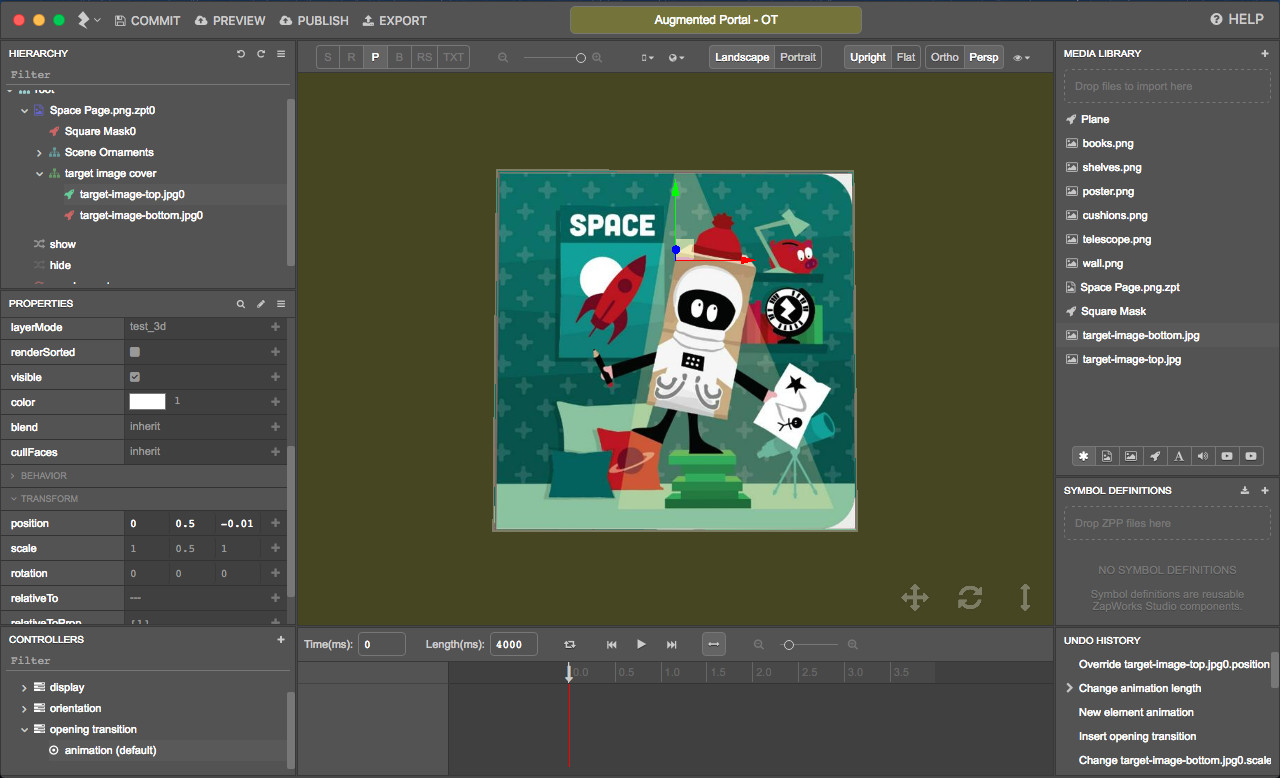 Note: We recommend that you use the zoom in/out tool to make sure you see the entire timeline (between 0 and 4000ms).

Note: To add an object’s property to a timeline, select the timeline in the Controllers panel, in the Hierarchy select the object and in the Properties panel click on the ‘+’ button next to each property that needs to be added to the timeline. 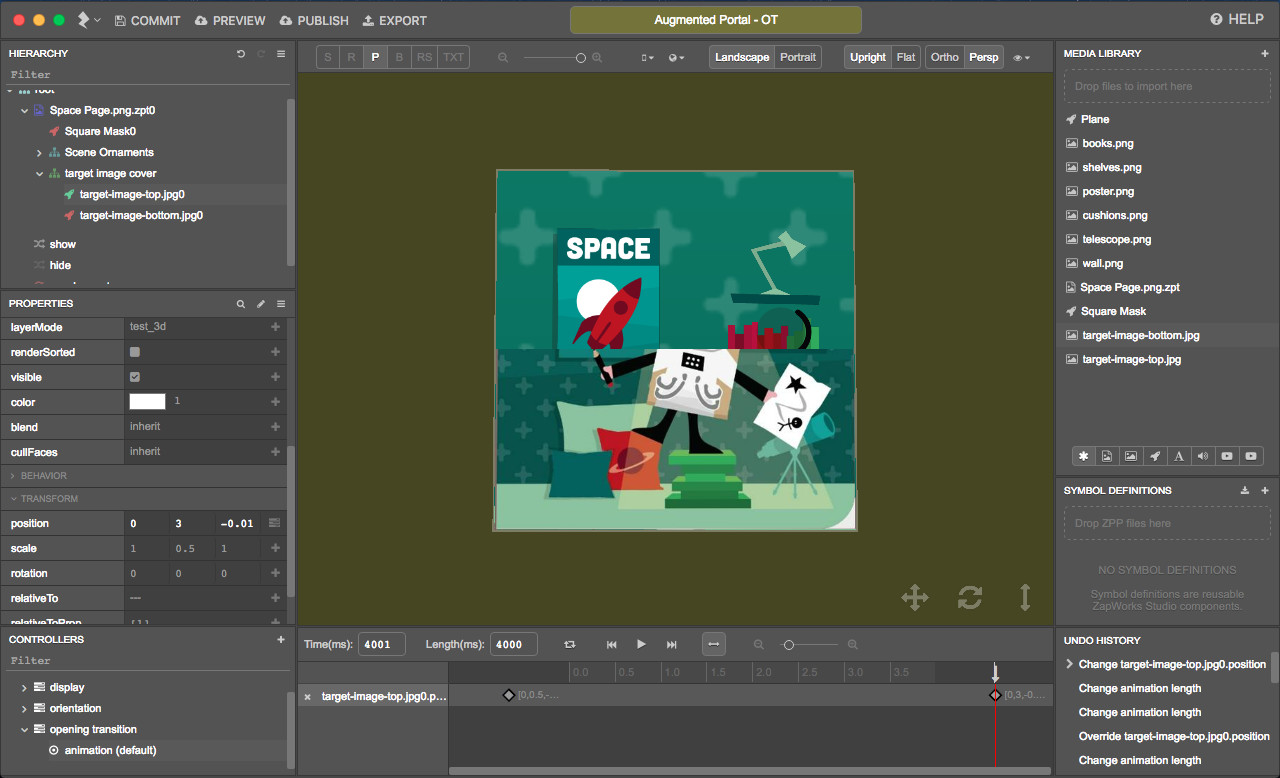 11)In the ‘animation’ timeline, on the ‘target_image_top.position’ line, create a transition block between the first and last keyframes.

Note: To create a transition block between two keyframes, select both keyframes, right click on the line between them and select ‘Make Transition’. 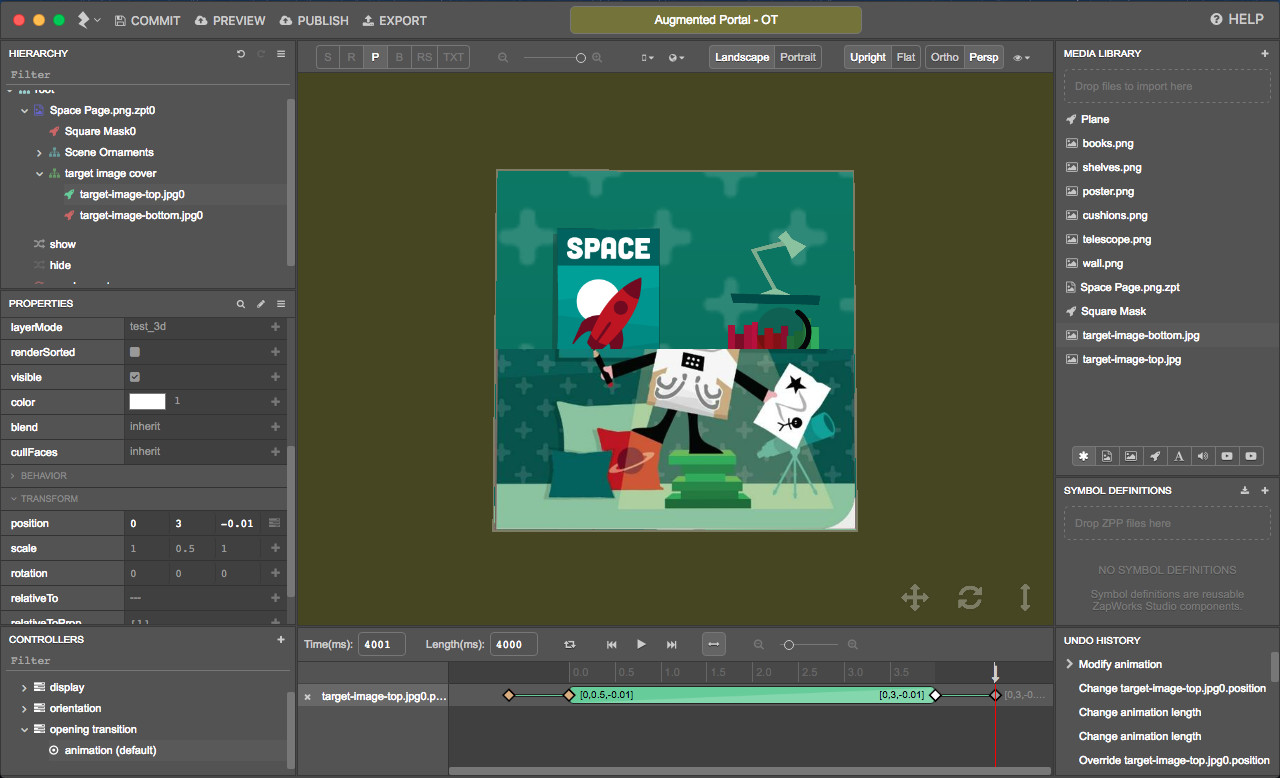 You can set the ‘Time’ to 0 and play the timeline to see how the transition looks so far.

We will now repeat this process for the bottom part of the target image: 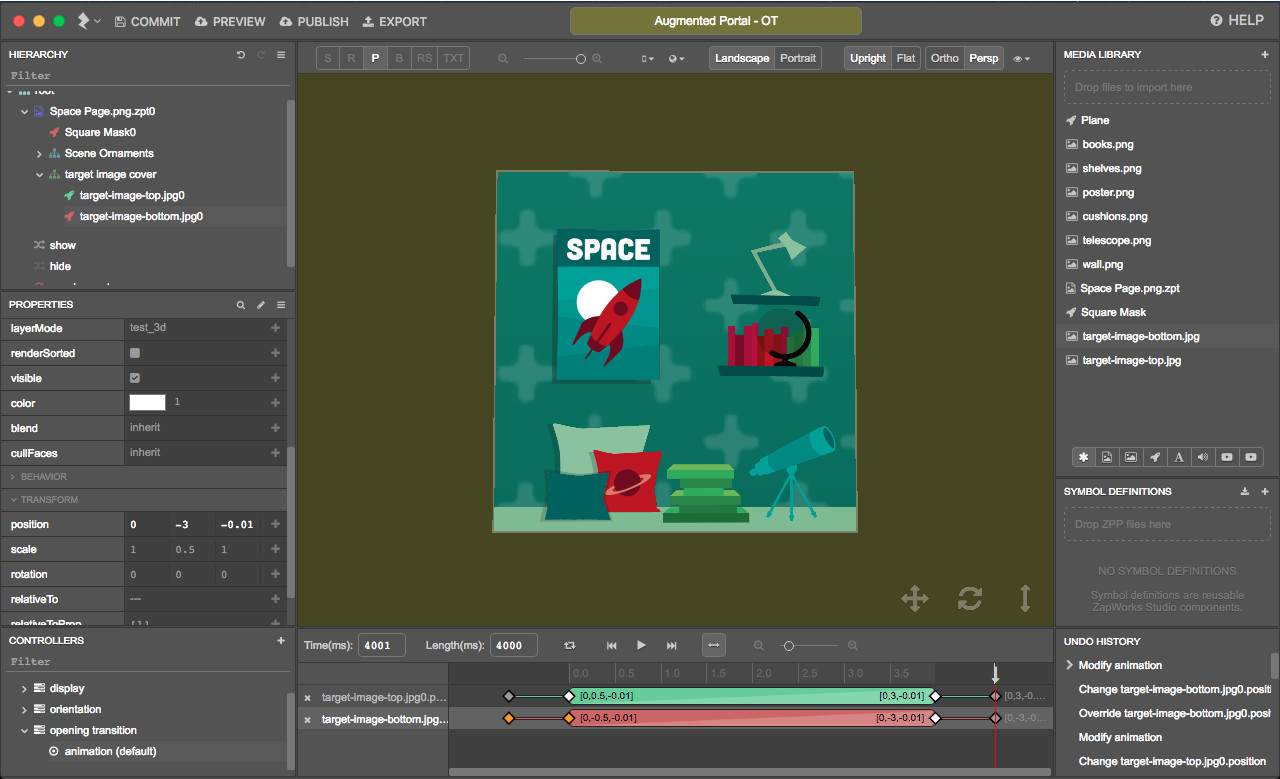 You can set the ‘Time’ to 0 and play the timeline to see how the transition looks.

To give the illusion that, as the top and bottom parts of the tracking image slide in opposite directions light progressively enters the room and illuminates its content, we will make the color of the ornaments change from black (as if there were not light) to normal (as if light had entered the room). 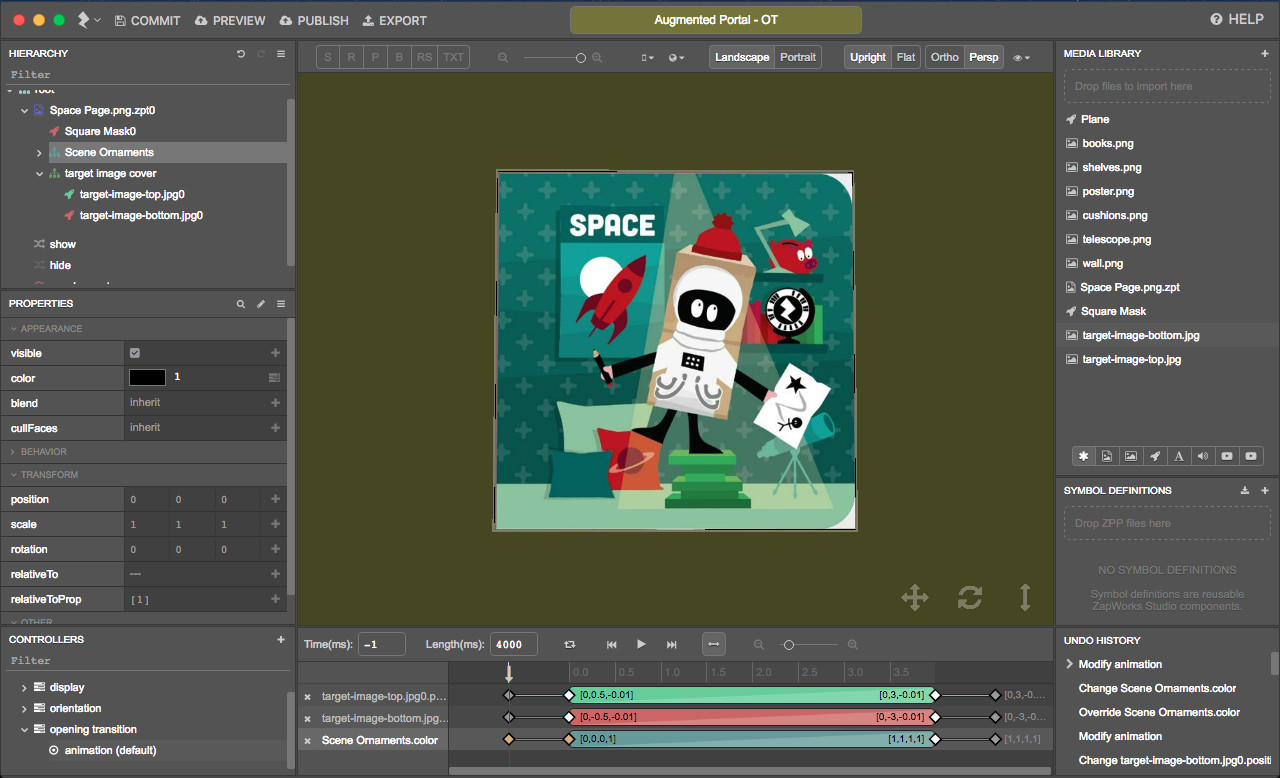 You can set the ‘Time’ to 0 and play the timeline to see how the transition looks now. It’s almost ready!

We will add a delay at the beginning of the timeline to make sure the user has time to see the tracking image on their device screen before the transition starts happening. 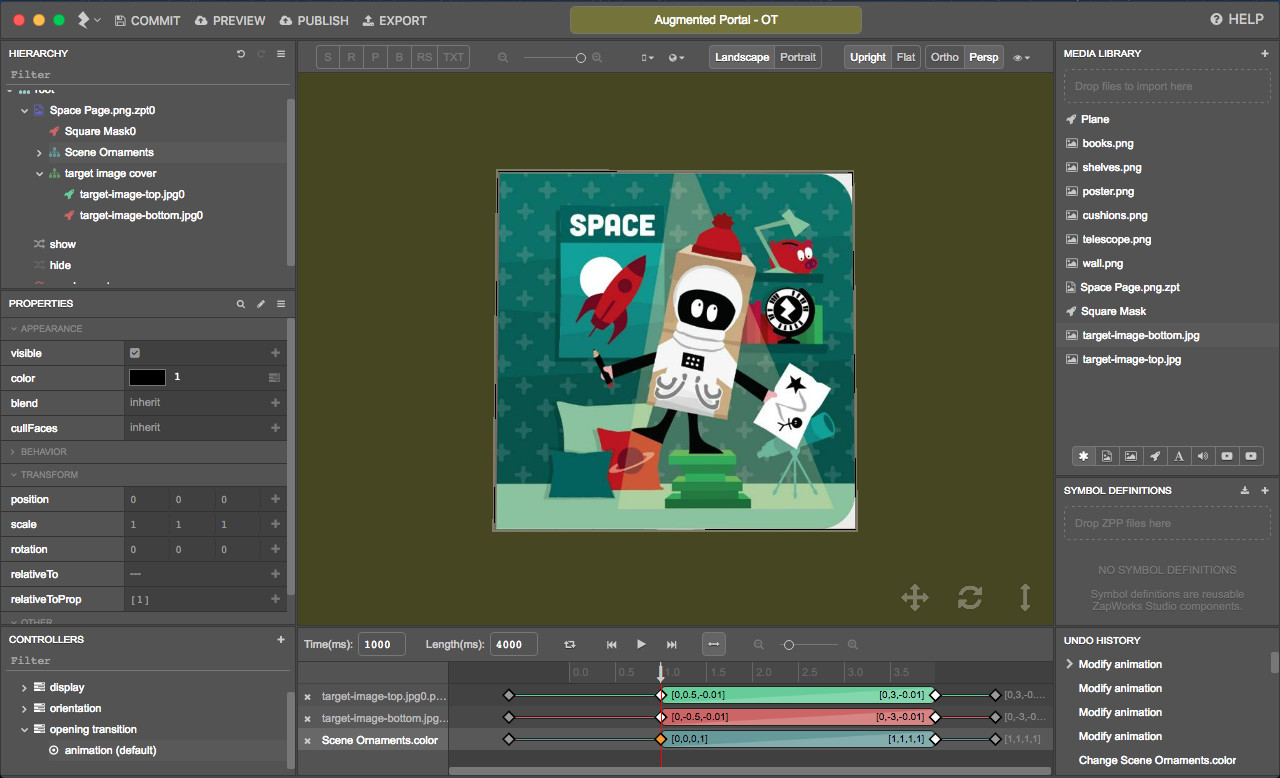 You can set the ‘Time’ to 0 and play the timeline one more time to see how it looks.

The opening transition is ready and all you need to do now is set it to play!

We’d like the transition to start playing when the tracking image is detected. Consequently, we’ll need to trigger it when a target image’s ‘seen’ event occurs (for more info, see the Target Events section in the article linked here).

Note: To set a timeline to play within a script, drag the timeline from the Controllers panel into the script, inside the function and when releasing select ‘play’. 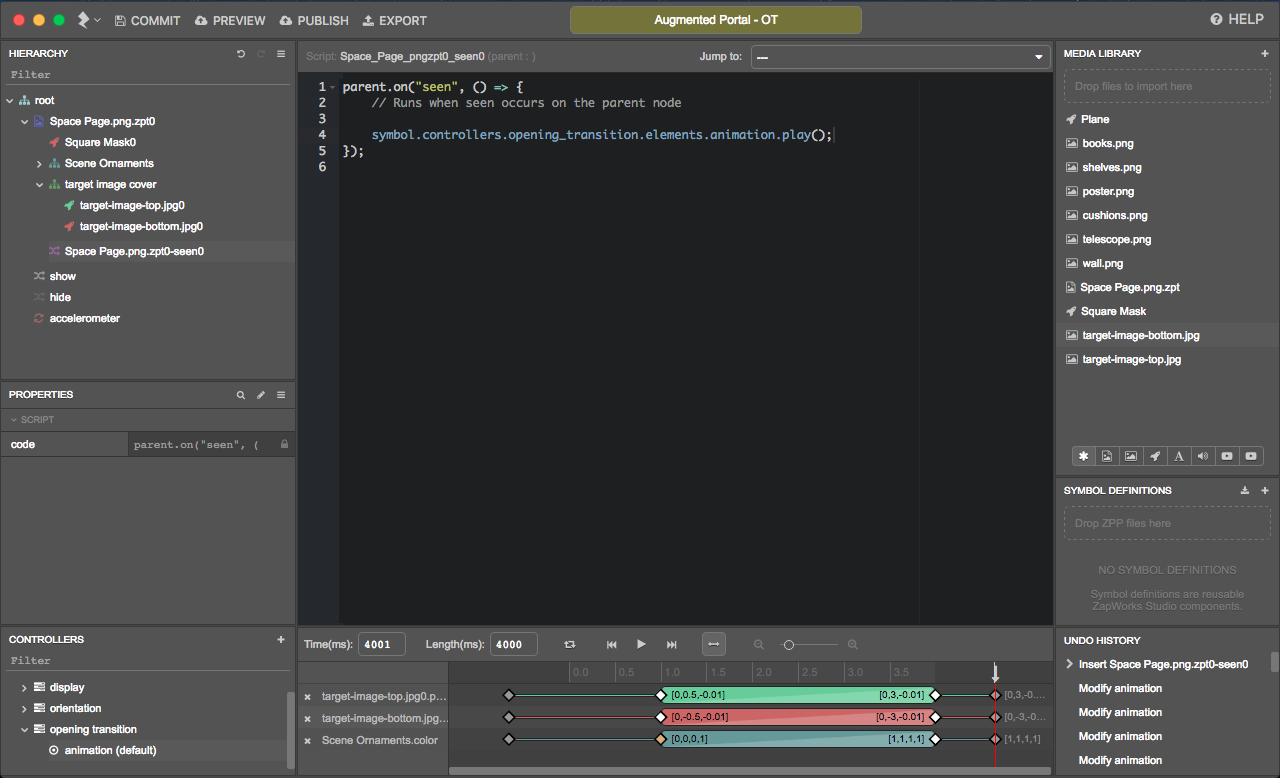 The opening transition has been added to your experience and is now set to play as soon as the tracking image is detected!

You can preview the updated experience by clicking the ‘Preview’ button in the top left of ZapWorks Studio. Scan the temporary zapcode generated and once the experience has been loaded, place the tracking image in front of the camera of your device.