Dragging a 360 Video / Image to see all sides

I would take a look at the code in this post.
RotationSlider.zpp

You can change it to move the the sphere.

Thanks Steve! I see the controller but do not see a 360 Image it is controlling. Am I missing something or do I need to import a 360 VR Image to see it work? Also does this work with a 360VR Image versus a Video?

Thanks for being so helpful on this Forum Steve.

The example zpp project from the thread Steve sent through (Thanks @stevesanerd!

) doesn’t use a 360 image. Rather, it’s an example of using swipe functionality to rotate an object, which is essentially the same functionality-wise when rotating a 360 photosphere.

If you create a 360 panorama you can set the code in the RotateByTouchScript script node (in the example project) to rotate the photosphere node in your own Hierarchy.

All credit to @bradleycox255 (Thanks Bradley!) who created this example project.

All the best,
Seb

Thanks Much Seb! I will try this out later today and report back the outcome!
Ed.

P.S. YEP Thanks Steve for being a great resource on the Forum!

I am trying the code and cannot seem to figure out this pesky error! 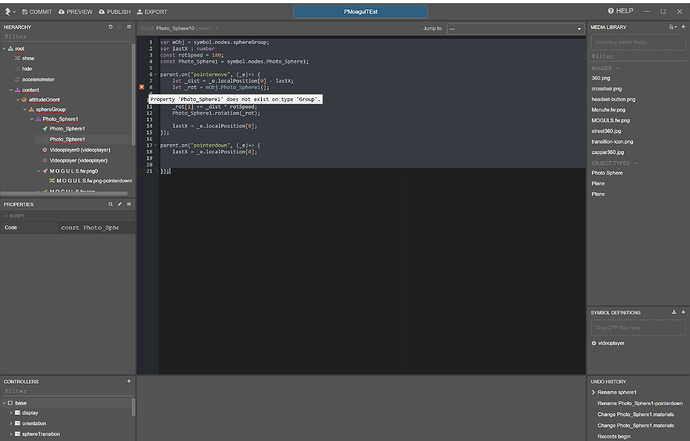 Any ideas what could be causing that?
Thanks for the help!

@stevesanerd @Seb
Very useful, works fine but there is a problem.

When the 360 image has interactive points, the Plane that allow the rotation, not allow to access to buttons or points.

Off the top of my head you have to change where the buttons are in the hierarchy.
If the interactive points or button is below the touch plane in the hierarchy move it above it. If not move it below it.