Designer Beta projects will not open on older computers

I leave my original rant in place FYI, but it seems like this problem was entirely the school’s fault and nothing to do with Zappar this time. I think that the Beta projects are hosted on a different server that is being blocked by the schools firewall and that the school can rectify this.
I am now just back to being frustrated by the lack of functionality, inability to accurately select handles for transformations, lack of grab-an-go, lack of basic editing tools, lack of shape making tools, no ability to select objects in a scene from a list, no ability to reorder scenes etc etc

Firstly I have to say that I really thing that Designer Beta is awful and barely fit for purpose.

Secondly, my current problem is that the Designer Beta files will not open on any chromebook or win 7 pc , which I’m using in schools. , but will open on my personal computers running windows 10 and 11.

The older machines will still open all the legacy projects , but any beta project will complain that it can’t connect to the servers.

Great to hear the school network was resolved.

I’ve passed on your feature requests for accurate selection, grab-and-go and shape making to the Designer team.

Quick selection of objects was added to Designer in the recent update, you can now go to the scene entities panel and select / re-order objects: 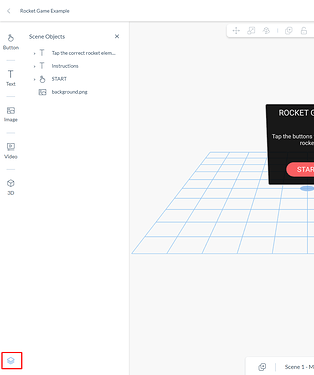 Designer is currently still in “Beta” but we are continuing to update it and have some amazing features and improvements on our roadmap.

Thanks again for the feature requests and we’d love to see some projects created by the students, if you have some to share!

Hope you are doing well.

What about analytics for Designer Beta projects?