I know this is probably super simple, but my knowledge with scripting/ TypeScript is pretty minimal - so any pointers in the right direction would be really handy!

Essentially I have a simple cube (for now) which is just a 3D object with a UV mapped texture from Blender. I’d really like to be able to cycle through a variety of other textures by either tapping on the cube or a separate button.

I’ve had a look at the two posts:

Hi, I have used Studio to load a photosphere in my cardboard headset once the zapcode is scanned. Can someone please give me an example of how to easily change the displayed photosphere so that I can transition through a series of images. Thanks!

How to change plane 'materials' property (texture) from my script Studio

I need to change a plane ‘materials’ property from the script. At the moment I am doing it in a very complex way - by creating several planes positioned exactly at the same location and having different texture each. Then I trigger ‘visible’ property of each plane through the scenes (I have a separate scene created for each case). The relevant part of the code is below. It works but it is unnecessarily complex and expanding this to several areas that I need to ‘trigger’ will increase the complex…

They both look like they should be relevant to me but I’m not sure how I might use a pointerdown script on a button to change the skin of the cube symbol/ material. (Or if that’s even the way to go!)

What you could do is create two separate buttons (one for each texture).

In each button’s ‘pointerDown’ script you’d create a reference to the cube by dragging it into the script before the main function and selecting ‘Insert local variable’, like so:

You’d also want to create a variable for your image texture in the same way.

Then, in the actual 'pointerDown’ function, you can then change the cube’s skin to a new image texture.

The following docs page explains how to do this:

Also, if you’re unfamiliar with scripting, I’d suggest having a look at these pages on our docs, as they’ll be very handy:

TypeScript is a rich and expressive programming language, based on JavaScript, and used in a number of applications.

The Zappar platform makes it possible to build dynamic and interactive experiences using TypeScript. Most things that are possible within the editor are also possible from TypeScript.

If you run into any issues, you can always send us an email at support@zappar.com.

Hey again Seb, thanks for the reply!

I think I largely understand how to insert local variables, it’s just getting them to interact once they’re all in the script.

You mentioned a docs page but then didn’t quite link it, I had another hunt around the site and came across some pages for skin and materials, but also this: https://docs.zap.works/studio/scripting/reference/imagetexture/ where the example points out largely what I’d like to do.

My apologies for not sending that link through.

You’re very close to the correct implementation, it looks like there’s just one change that needs to be made

Instead of using 'myObject.materials’, you should use 'myObject.skin’, and then pass through the texture file as an argument like so:

This should give you the functionality you’re looking for.

As a side note, I can see that you’re using an older version of Studio. We recently released an updated version, which you can download at the link below:

Thanks for all of this direct help!

Have updated Studio to the latest version… No luck on changing to ‘myObject.skin’ however, the editor insists that there’s no such thing on ‘root__Cube__sym’

Very strange, could you send your project’s zpp file over to support@zappar.com please?

I can have a look at it and reply to you through there.

I’ve created an example zpp file, to show how you can go about doing this.

I figured it could benefit others so I’ve posted it on here instead, if you don’t mind.

Firstly, there’s a couple of things to note:

Now, for the actual steps. 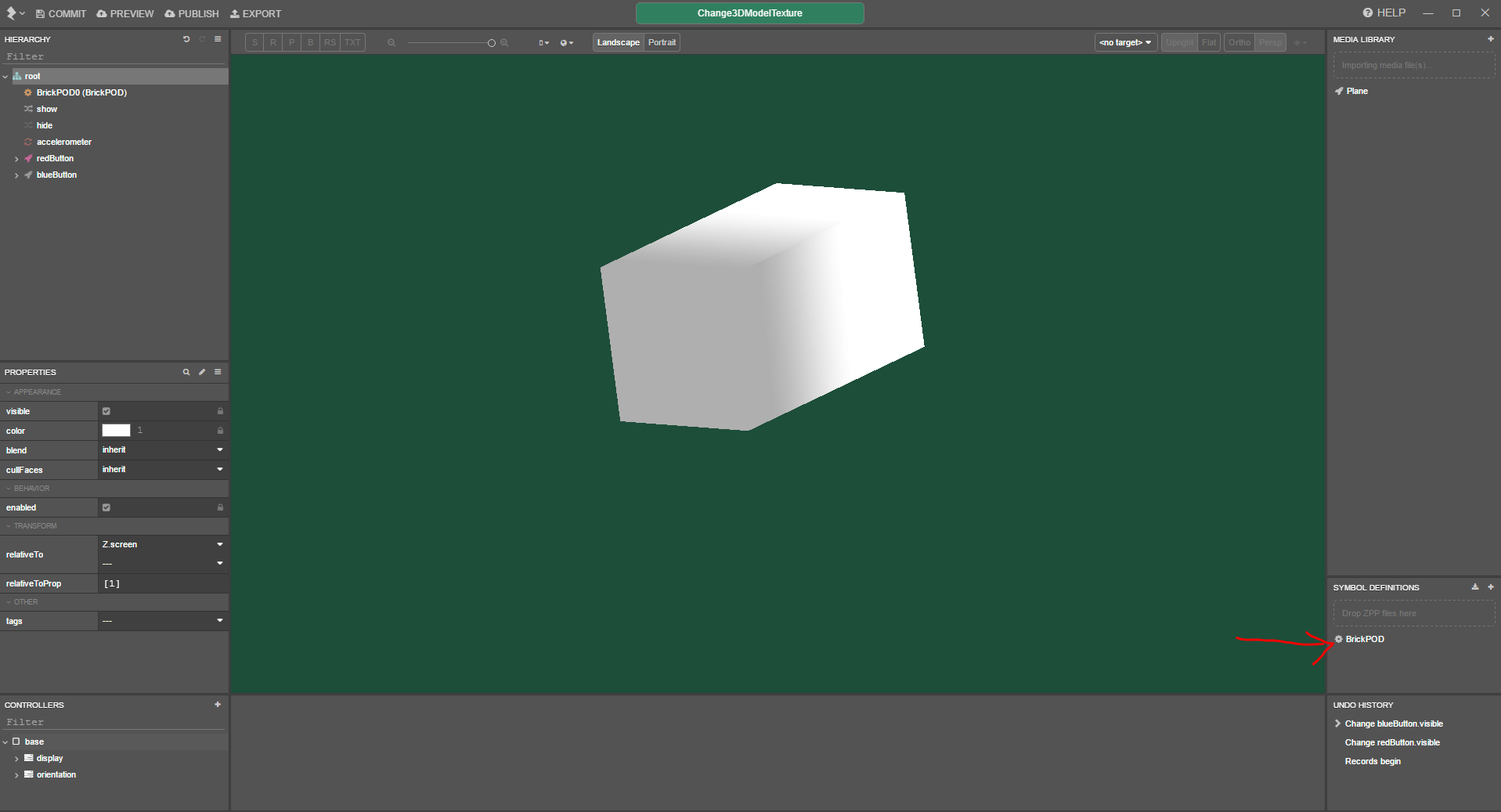 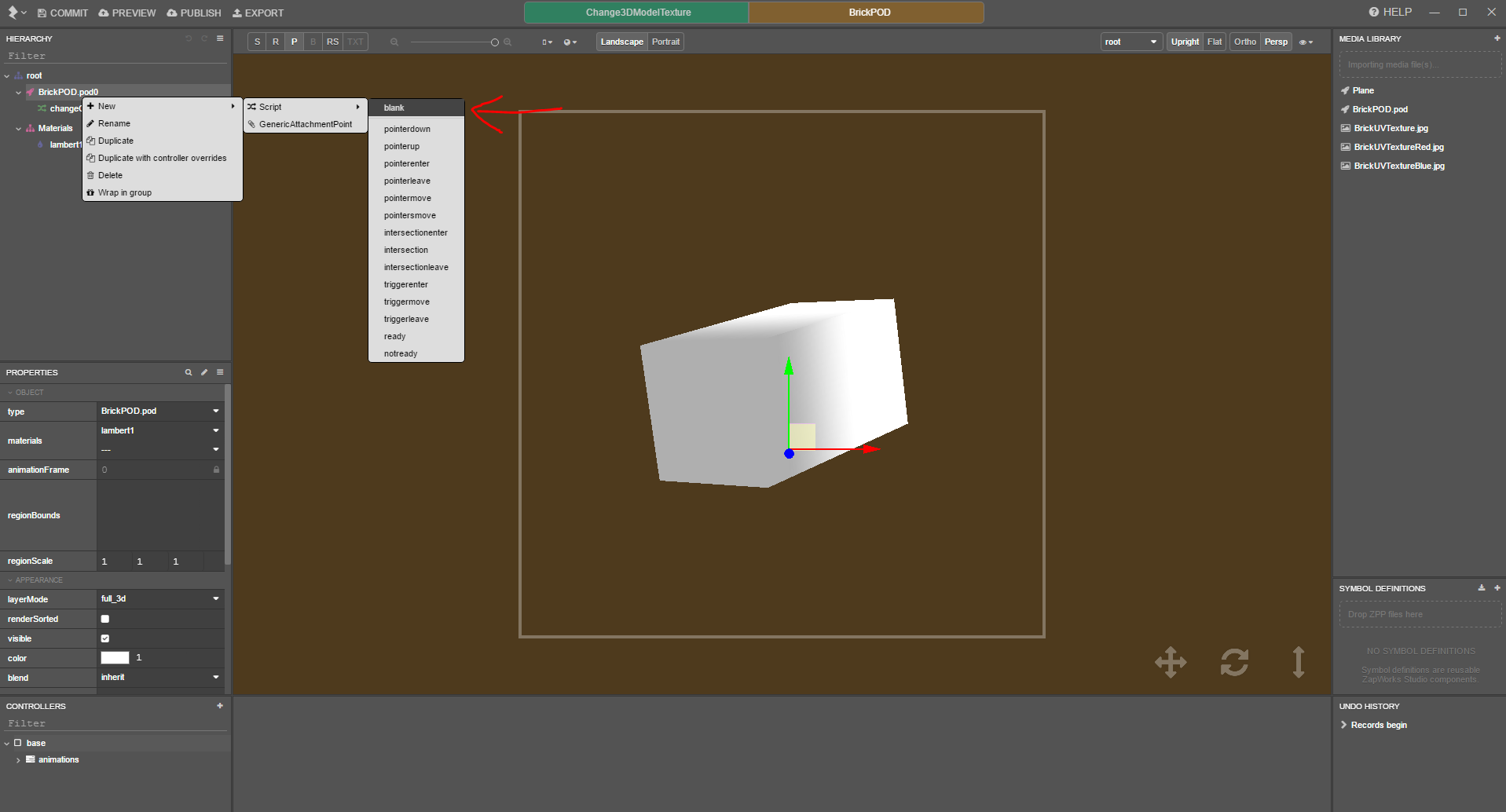 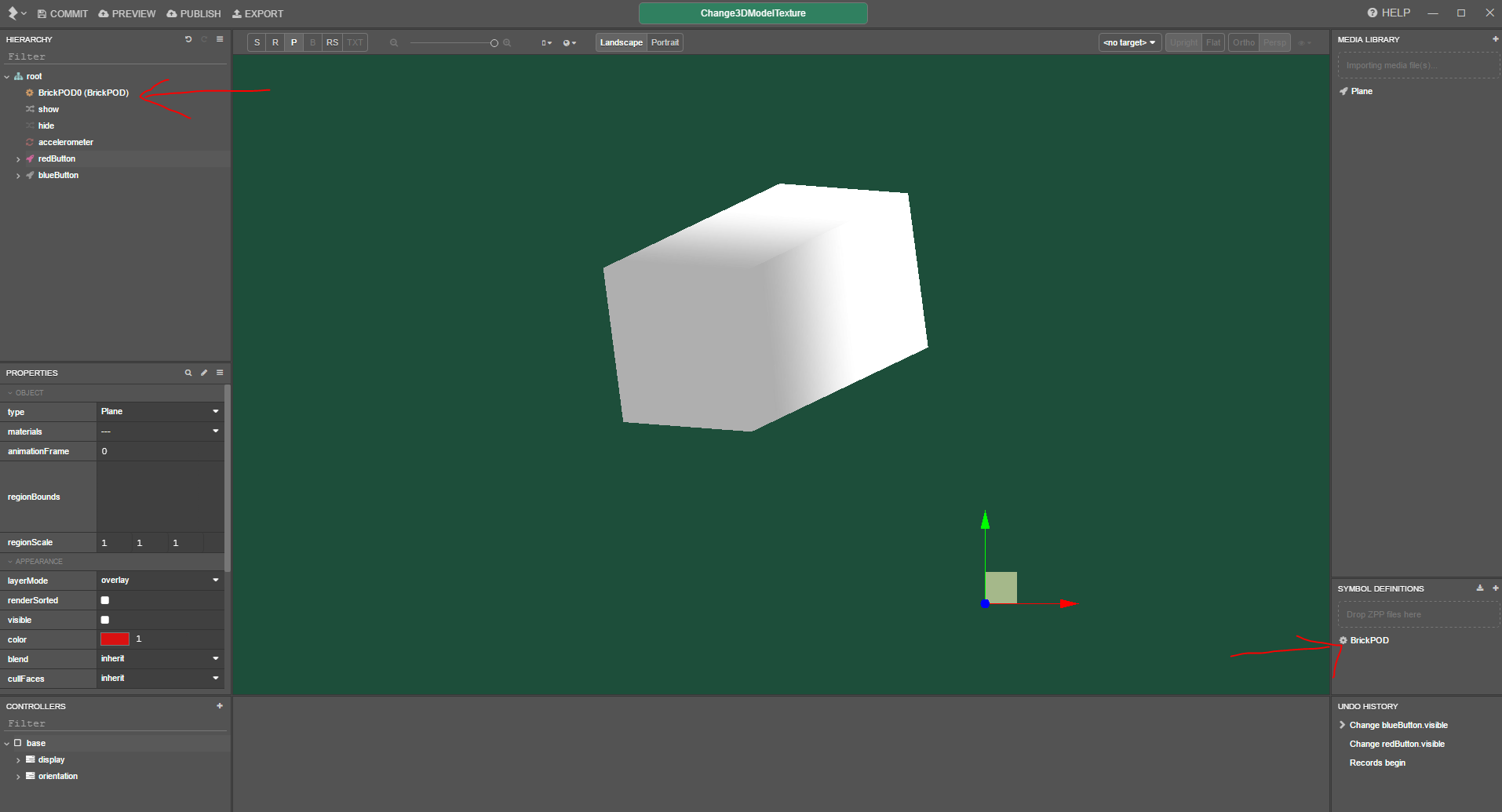 I’ve attached this example project’s zpp file for anyone who’d like to have a closer look at how it works.

Edit: I’ve uploaded the assets used in the example, here’s the link.

Hope this proves helpful to some of you.
Seb

Hello Seb, I test it and is a fantastic way of changing the “DiffuseMap” or main texture.
Is there a function to change “Normal Map”, “Ambient Map”,… and so on? also to change Material?
I look at normalMap(…) but I couldn’t realice how to do it.

Do you know how to do it?

Thank you in advance!!!

This will update the main_mat materials diffuseMap with the image taken from the Media Library upon runtime.